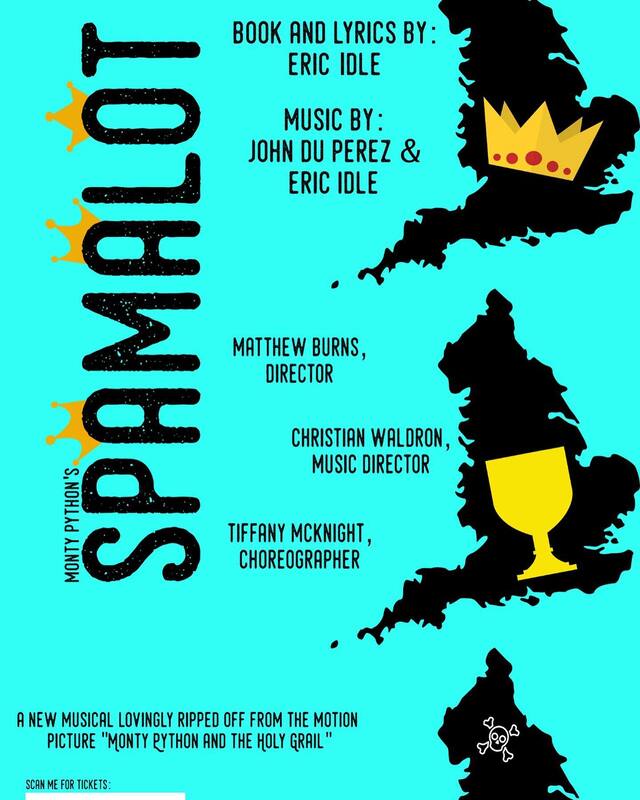 This outrageous musical comedy is lovingly ripped off from the film classic, Monty Python and the Holy Grail.  The Tony Award winning, best musical Monty Python’s Spamalot is coming to Downtown Benton in search of the Holy Grail.  Join King Arthur and his Knights of the Round Table at the Historical Royal Theatre March 31st-April 10th. This production is made possible by the sponsorship of Stilwell Insurance & Financial Services, Inc. and Roberson & Associates Insurance. Dates are as follows: March 31st - April 2nd and April 7th-9th at 7pm; April 3rd and April 10th at 2pm. Ticket Prices: $18: General Admission; $15: Seniors aged 60 and above, members of the military and College students with valid ID; $8: 12th Grade and below. Tickets are available at TheRoyalPlayers.Ticketleap.com. *NOTE: There is a strobe and haze warning on this production.

GET YOUR TICKETS NOW AT https://theroyalplayers.ticketleap.com/monty-pythons-spamalot/

Monty Python’s Spamalot features a book by Eric Idle, based on the screenplay of Monty Python and the Holy Grail by Monty Python creators Graham Chapman, John Cleese, Terry Gilliam, Eric Idle, Terry Jones and Michael Palin, with music and lyrics by Grammy Award-winning team of Mr. Idle and John Du Prez.  Original Broadway Production produced by Boyett Ostar Productions. Monty Python’s SPAMALOT is presented through special arrangement with and all authorized performance materials are supplied by Theatrical Rights Worldwide 1180 Avenue of the Americas, Suite 640, New York, NY 10036. www.theatricalrights.com
Support for the Royal Players is provided, in part, by the
Arkansas Arts Council, an agency of the Arkansas Department
of Parks, Heritage, and Tourism, and the National Endowment of the Arts

The purpose of the Royal Players, Inc. shall be to improve the quality of life in the community by offering opportunities for creative activity, artistic expression, and quality entertainment.

​The Corporation shall exist exclusively for educational, and benevolent purposes.